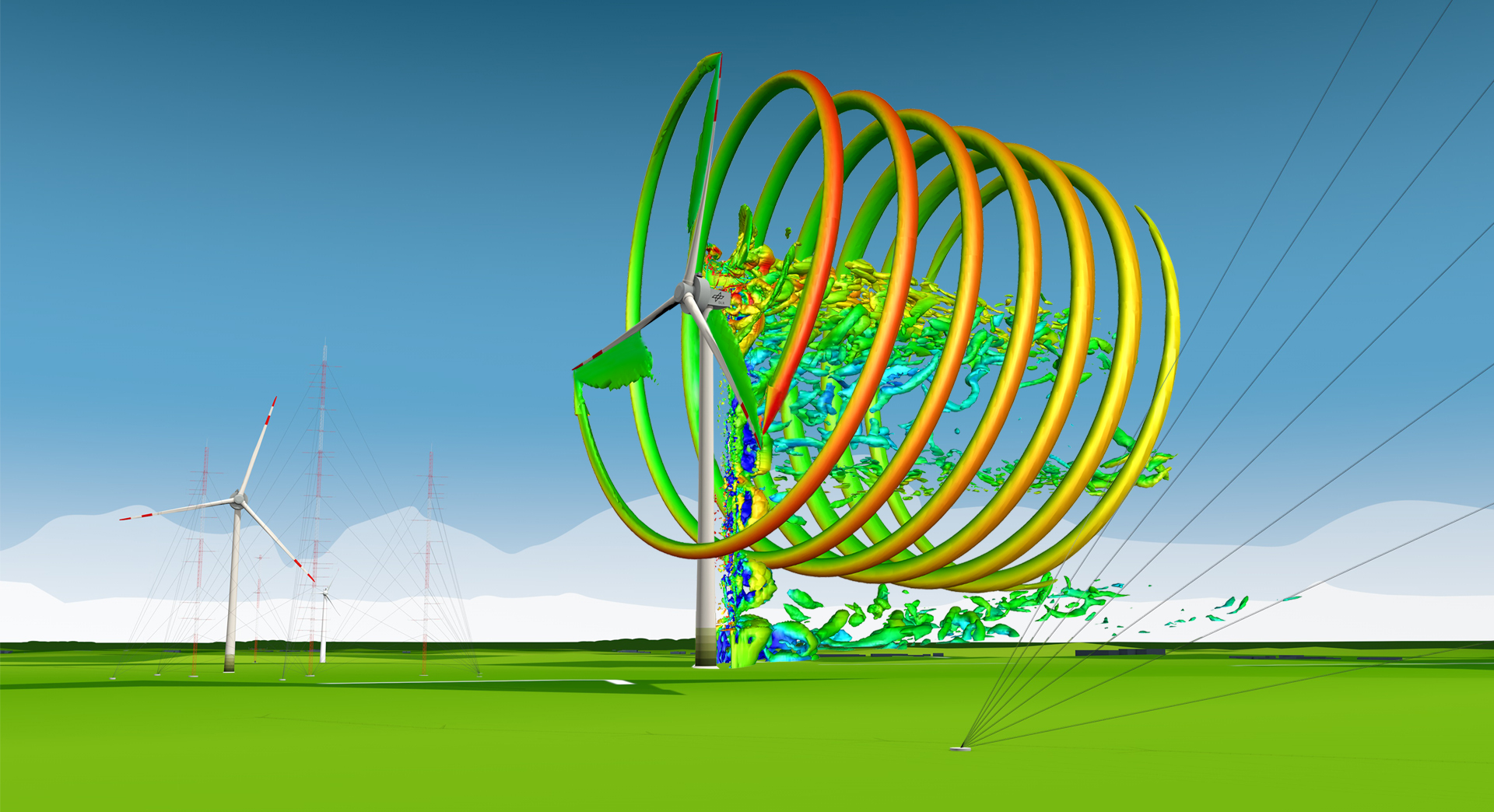 A simulation can be used to provide a graphical representation of the turbulent wake behind a wind turbine. Credit: DLR (CC BY-NC-ND 3.0)

A simulation can be used to provide a graphical representation of the turbulent wake behind a wind turbine. Credit: DLR (CC BY-NC-ND 3.0)

The research wind farm (WiValdi) enables full-scale research for developing technologies to increase the acceptance, efficiency and cost-effectiveness of wind turbines. Various DLR institutes and facilities together with partners from the Research Alliance Wind Energy are building the research wind farm, which will later be used by the wider research community.

The Krummendeich Research Wind Farm is not a conventional wind farm. The meteorological measurement masts, which are up to 150 metres tall, allude to this fact. In addition, the wind turbines themselves are equipped with extensive sensor technologies and some measurement devices have been installed in the field. These sensor technologies are at the heart of the research wind farm because they distinguish it from wind farms for electricity generation. The instrumentation is a tool to detect all physical variables.

The majority of sensors on the measurement masts detect environmental influences. Primarily, of course, wind speeds, but also temperature, humidity and solar irradiance. Together with the LiDAR devices in the field and on the wind turbines, it is possible to detect turbulent wind fields that will hit the wind turbine rotor in the next few seconds. When the wind field hits the rotor, the individual blades react quite differently – depending on the turbulence. The blades flex and move. In order to detect this flexing with millimetre precision, each blade is equipped with a wide variety of sensors. Flexing can be determined mechanically (stain gauges) or optically (fibre optic extensometers). The exact movement of the blade is recorded by numerous acceleration sensors. A network of piezoelectric sensors detects possible damage or overloading of the rotor blade at an early stage. In simple terms, this structural health monitoring allows the researchers to see at an early stage how the material is performing and when it is the optimum time to replace individual parts or materials.

The forces on the rotor blades are transmitted via the blade bearings to the hub and drive the generator. Not only the blade bearings, but also the azimuth and main bearings are closely monitored to reliably detect these forces. The electrical components of the generator, converter and transformer are also comprehensively instrumented in order to monitor the behaviour of the various subsystems while taking into consideration all factors and thus allow predictions to be made about their service life.

The largest component of a wind turbine, the tower, is also exposed to very strong forces. Acceleration and strain sensors make it possible to detect and analyse even the smallest movement of the tower. The instrumentation extends all the way down into the foundations. The foundation piles transfer all the forces acting on the wind turbine into the ground.

In addition to discharging loads into the ground, the rotor also changes the wind field (strength, turbulence, noise) behind the turbine. These effects are recorded by the sensors on the measurement masts (dependent on the wind direction) and can be analysed in real time.

The multitude of sensors continuously generate a very large volume of data, which is available to the scientists at any time and any place thanks to a sophisticated data management system.

The extensive instrumentation provides an excellent infrastructure for testing new technologies, such as the rotor blades with new structures, shapes, materials and designs that are being developed by the Research Alliance Wind Energy as part of the SmartBlades project. New components, such as active or passive adaptive leading and trailing edges for blades, can also be tested here. The bending-torsion coupling implemented in the smart blades can be thoroughly proven here.

However, it is not just the mechanical components being trialled. New controller algorithms are being tested at the research wind farm in order to be able to adapt the wind turbine to the current wind situation. The primary goals are to achieve a greater energy yield and protect the loaded structures in order to achieve a longer service life. This not only includes the control of the individual rotor blades, but also the behaviour of the wind turbines in the network – particularly in a wake configuration – that is, when a second wind turbine is in the ‘slipstream’ of the first and is thus exposed to complex turbulence and reduced wind speed. Another objective is to investigate measures to reduce disturbance phenomena, such as noise. In addition to hardware-related modifications, software-related operational management processes can also be investigated for this purpose.

The research infrastructure can be used to validate a wide variety of models. Simulations have become an indispensable part of scientific research, but these simulation models must first be verified and validated using real test cases.

In the WindMuse project, DLR, in conjunction with its FVWE partners, has developed a multi-disciplinary simulation environment using multi-body simulation to predict the aerodynamic, aeroelastic and structural mechanical behaviour of a wind turbine using a virtual model. The results of such a simulation can be validated here at full scale. This can improve the simulation tools and reveal possible weaknesses. In this way, even more accurate predictions can be made in the future without the need for cost-intensive experiments.

Various turbulent wind models from atmospheric research can be validated with the instrumentation on the meteorological measurement masts. These wind models form, for example, the aerodynamic basis for the development of new rotor blades. Validation of the models is very important here in order to develop rotor blades for realistic load cases.

Control and operating concepts, that is the behaviour of the turbine under different wind and operating conditions, can also be simulated and optimised in simulation models. Validation of such models is not feasible in conventional wind farms. This is due to commercial constraints and the availability of the necessary measurement equipment for reliable trials. However, extreme and unusual operating modes can be safely and extensively tested at the Krummendeich Research Wind Farm to validate the models and ensure a robust application.